The Dave Hardy Cup and Kelly-Anne Drummond Cup will be hoisted on Sunday. 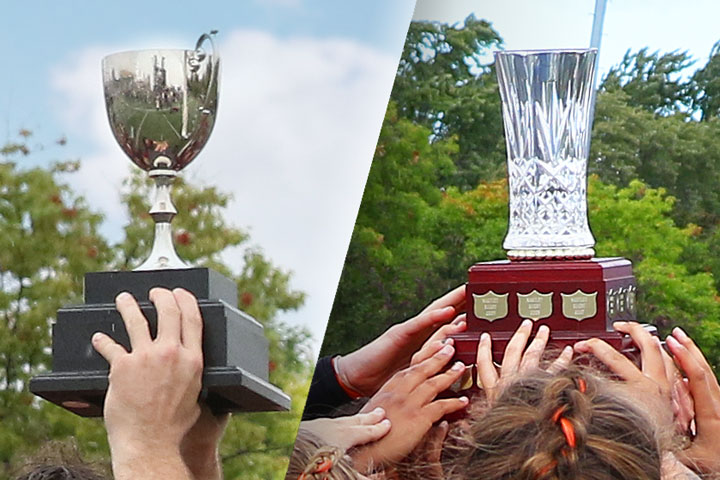 Concordia, McGill to clash at rugby cup doubleheader on Sunday

For the first time ever, Concordia University will host two classic rugby cup games in an epic doubleheader on Sunday afternoon on the Loyola campus in N.D.G.

The third annual Dave Hardy Cup, featuring the Concordia Stingers and McGill Redbirds men’s rugby teams, is set for noon. While the popular 18th annual Kelly-Anne Drummond Cup, pitting the Stingers against the McGill Martlets, is slated for 2:30 p.m.

The men’s game pays tribute to Hardy, who has made a long-time commitment to the development of rugby in Quebec and Canada, including many years as a coach at both McGill and Concordia. His devotion to the sport is going on 60 years. He is considered to be one of the pillars of Quebec rugby and has mentored and taught thousands of young players, coaches and officials.

Hardy will be on hand to present the Cup to the captains of the winning team.

The Kelly-Anne Drummond Cup has been the highlight of the women’s season for almost two decades. The game pays tribute to Drummond, a former Concordia rugby player who died tragically on Oct. 4, 2004.

It’s a great source of pride for the Stingers to honour and remember Kelly-Anne and to play in front of friends, family and her mother Doreen Haddad and father John Drummond.

Haddad has been a devoted champion of the Stingers women’s rugby program for many years. She is so devoted that she set up a scholarship to support a women’s rugby player.

Donations in support of the Kelly-Anne Drummond scholarship are encouraged. Donate HERE

Tickets for the doubleheader are available HERE