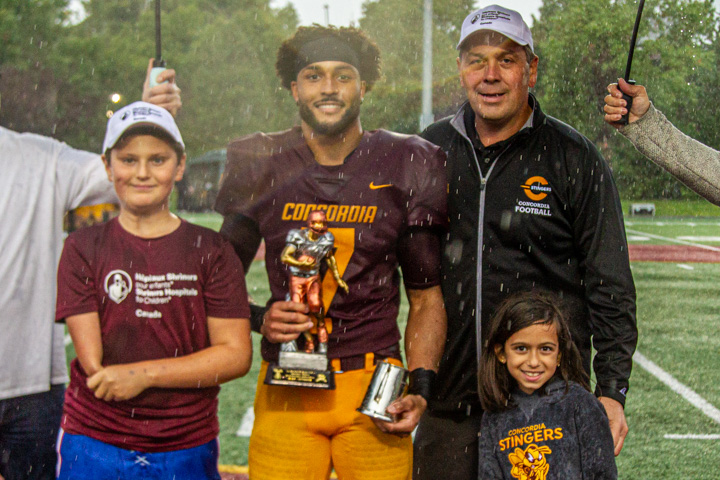 Concordia Stinger fifth-year wide receiver James Tyrrell caught five passes for 97 yards, but it wasn’t enough to ignite his team's offence against the No. 1-ranked Laval Rouge et Or in the 33rd annual Shrine Bowl at Concordia Stadium on Saturday.

Laval won 41-6 in the game devoted to recognizing the spirit and resilience of the patients at the Shriners Hospital for Children – Canada.After the game, Tyrrell was presented with the John Gilday Memorial Trophy as the Stingers’ outstanding player on offence. Laval running back Vincent Breton-Robert also received an MVP award for his efforts. The third-year player carried the ball 14 times for 134 yards and a touchdown.

Two awards also recognized the outstanding players on defence. Stinger rookie defensive end Wael Nasri was presented the Grant Peterson Trophy. He led all tacklers in the game with five solos and five assists. The Laval defensive standout was third-year linebacker Alec Poirier who collected four solo tackles, including a sack, and an assist.

Overall, Concordia had 14 first downs and 225 yards of offensive. Quarterback Adam Vance completed 15 of 28 passes for 206 yards and an interception.

The Stingers’ six points came off of two field goals from Andrew Stevens who connected on kicks of 19 and 31 yards.

The Rouge et Or led 12-0 after the first quarter and stretched the lead to 28-3 at halftime.

The Stingers have a bye this coming week and return to battle the Sherbrooke Vert & Or on Saturday, Sept. 21. It will be Concordia’s Homecoming game.