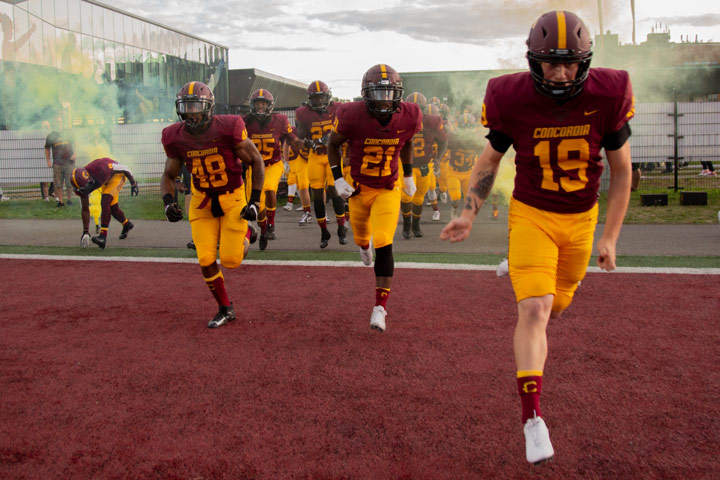 The 2019-20 Stingers Signature Series kicks off this Saturday with a classic football showdown between two heated rivals before a Homecoming crowd. The first can’t-miss event will see the Stingers host the Sherbrooke Vert & Or at Concordia Stadium at 1 p.m.

The Signature Series is an eight-game package of the most entertaining and hotly-contested Stingers sports events of the season, brought to you by McKibbin's Irish Pub

.Every time Concordia and Sherbrooke meet on the football field, there’s a crazy finish.

Last year the teams met Sept. 8 in Montreal, and on the last play of the game, Stinger quarterback Adam Vance rolled out to his left and rifled the football 25 yards down field into the hands of veteran receiver James Tyrrell for a touchdown giving Concordia a 22-20 victory before 2307 fans.

The teams met again on the last day of the regular season in Sherbrooke. This time the Vert & Or staged a dramatic come-from-behind victory, scoring the game-winning TD with just under three minutes to play. They won 28-21 and eliminated Concordia from the playoffs.

It’s anybody’s guess how this Saturday’s game will turn out, but the dynamic duo of Vance and Tyrrell will be back in action.

Vance leads the conference in passing. He’s completed 55 of 94 passes (58.5 percent) for 666 yards for an average of 222 yards a game. Tyrrell leads Quebec in receiving with 18 catches for 252 yards in three games.

The Alumni Zone will be in full swing with hundreds of supporters from Loyola, Sir George Williams and Concordia on hand.

The 2019 Concordia Sports Hall of Fame inductees will be introduced at halftime and the game will be televised live on TVA Sports.

We want to C U at the Game -  Purchase tickets here.