Kicker Bradley James Santos is congratulated by his teammates. 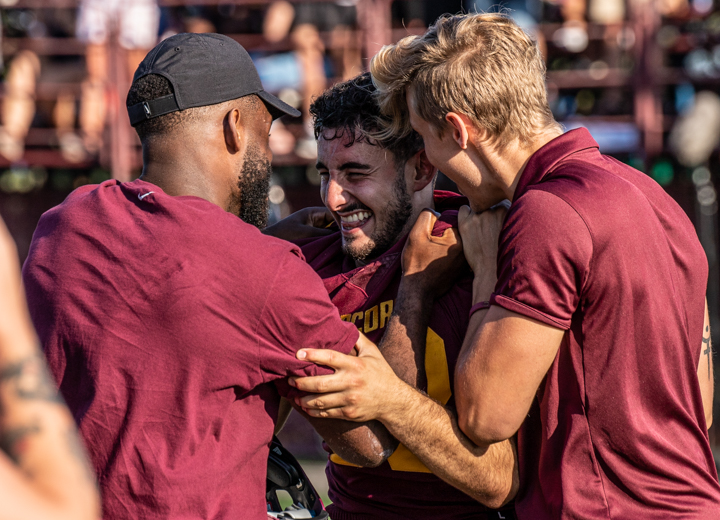 Concordia Stinger rookie kicker Bradley James Santos stepped up to the ball on the 36-yard line and drilled it through the middle of the uprights with no time left on the clock to deliver a 37-35 victory over the Sherbrooke Vert & Or in the Homecoming football game at Concordia Stadium on Saturday afternoon.

Although he dressed in previous games this season, this was Santos’s first time going in for a field goal attempt. The Stingers were trailing 35-34 at the time. He also connected on three converts.

The Laval, Que. native comes out of the Collège André-Grasset football program.

The win is the first for Concordia in four games this year. It has huge implications in the standings. It moves the Stingers into a three-way tie with Sherbrooke and McGill University. Each team has one win, and two of the three will make the playoffs.

It was also a breakout game for quarterback Adam Vance who completed 24 of 33 passes for 426 yards and three touchdowns. His favorite target was veteran receiver James Tyrrell who caught 11 passes for 176 yards and two TDs.

Overall, Vance orchestrated an offence that rolled up 25 first downs and 443 yards. His also hit slotback Jacob Salvail for a 34-yard touchdown. The final major of the day was scored by running back Glody Musangu on a three-yard run.

The Stingers held a 19-point lead early in the fourth quarter, but Sherbrooke scrapped its way back into the game and took the lead 35-34 with 33 seconds left to play.

The Vert & Or had 24 first downs and 475 yards of offence. Quarterback Zach Cloutier passed for 326 yards and running back William Tremblay-Harnois carried the ball 10 times for 121 yards.

Concordia will meet the Montréal Carabins on the mountain Friday night, while Sherbrooke returns to Montreal to face McGill on Saturday afternoon.