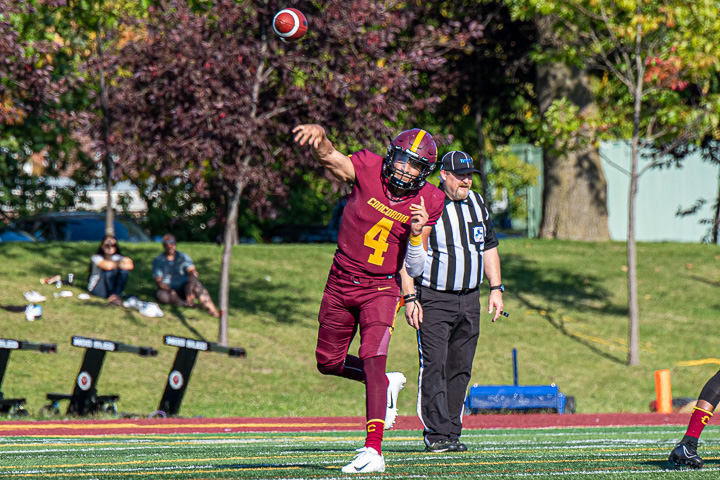 The Concordia Stingers football team will look to punch its ticket to the RSEQ conference playoffs when it hosts crosstown rival McGill University on Saturday afternoon in what is shaping up the be the program's biggest game since the arrival of head coach Brad Collinson in June of 2017.

With a win over McGill this weekend, the Stingers would secure third place in the RSEQ and a date with the Montréal Carabins in the semifinals on Nov. 2. A loss to McGill would not officially eliminate Concordia from playoff contention – Collinson and his team could still secure the fourth and final playoff spot if the Sherbrooke Vert & Or lose their game versus the Laval Rouge et Or.

The Stingers’ dynamic duo of quarterback Adam Vance and wide receiver James Tyrrell will look to put an exclamation point on the end of their impressive senior seasons in what will be their final home games in maroon and gold.

On the defensive side of the ball, third-year defensive halfback Khadeem Pierre continues to flash his game-breaking abilities. Pierre is tied for first in the RSEQ with three interceptions – he’s returned all three for touchdowns, but two of his pick-sixes were called back on penalties.

The Stingers will look to exact a measure of revenge after being humbled by McGill at Percival Molson Stadium back on Aug. 30 by a score of 40-14 in the annual Shaughnessy Cup game.

This weekend’s game also marks the second consecutive year Concordia steps up to promote breast cancer awareness. The Stingers will add a touch of pink to their game day uniforms to remind fans that October is breast cancer awareness month. Members of the team will also collect donations for the Quebec Breast Cancer Foundation.

Be sure to visit the Quebec Breast Cancer Foundation website.