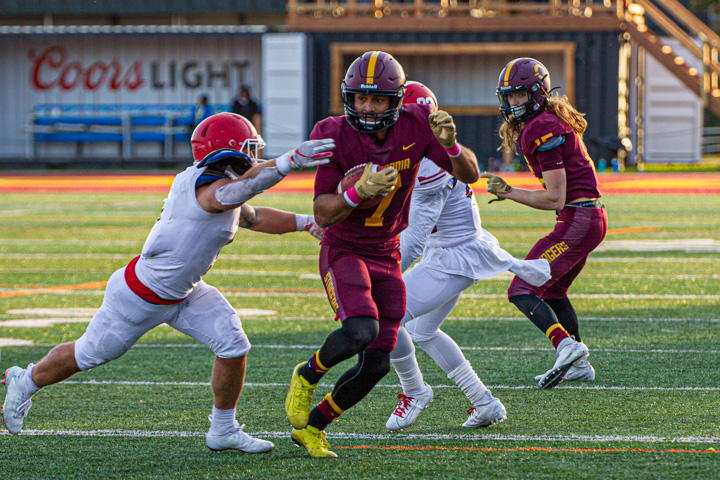 Stinger football fans witnessed the end of an era when quarterback Adam Vance and wide receiver James Tyrrell walked off the field for the last time at Concordia Stadium on Saturday afternoon.

The graduating seniors, who will go down as one of all-time great quarterback-receiver tandems, cemented their place in Concordia history with another strong outing in a tough 23-17 loss to McGill University before a boisterous crowd of 2207.

The pivot from Visalia, Calif. finishes the regular season on top of the RSEQ with 148 completions on 246 attempts for 2014 yards and seven touchdowns.

Tyrrell wraps up his season with 52 receptions for 779 yards and two touchdowns. He is first in the RSEQ in receptions, yards and average yards per game with 97.4.

The Concordia record for most receptions in a single season belongs to Daniel Skube who caught 60 passes in 2015. Tyrrell is in a three-way tie for second place with Cory Watson (2009), currently with the Saskatchewan Roughriders, and Stinger Vince Alessandrini (2016).

With 779 yards receiving, Tyrrell trails only Watson for the all-time Stinger record. The current CFL star had 821 yards in 2009.

Vance, Tyrrell and the Stingers meet the Laval Rouge et Or in Quebec City on Saturday, Nov. 2 in the RSEQ semifinals. Kickoff is slated for 2 p.m.