The Stingers are riding a three-year winning streak in RSEQ action. 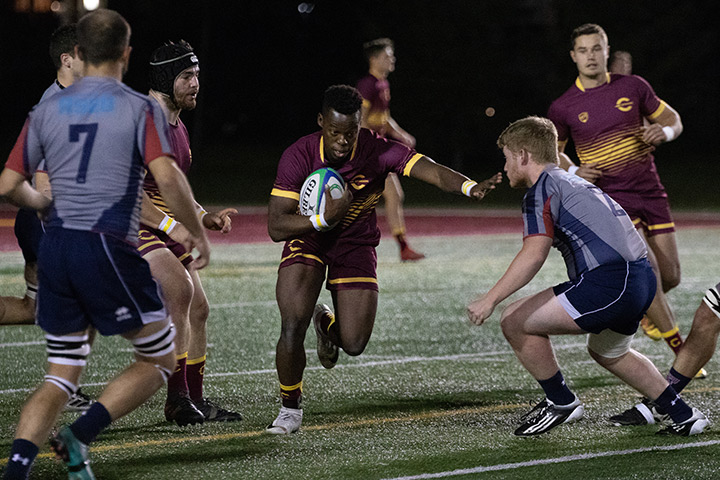 The Concordia Stingers men's rugby team completed a third straight perfect season with a 31-15 victory over the Bishop's Gaiters on Sunday afternoon in the driving rain.

The win gives head coach Craig Beemer and his team a 6-0 win-loss record in the RSEQ regular season. Several programs have recorded perfect campaigns in the Quebec conference over the years, but only two universities have put together three consecutive unblemished seasons. McGill dominated men’s rugby in 2002, 2003 and 2004, and Concordia rules in the current era.

The team averaged 42 points for and 11.3 points against in the six games. Dylan MacDonald and Jackson Marquardt led the Stingers in try scoring with six each. Aidan McMullan was the leading scorer in the league with three tries, 24 converts and two penalty kicks for 69 points.

The Stingers will open the playoffs with a semifinal game at home to the Montréal Carabins on Saturday at 1 p.m.  Concordia defeated the Carabins 28-5 on Oct. 20 in the sole meeting between the teams in the regular season.

In the other semifinal, the Ottawa Gee-Gees will visit McGill on Saturday, also at 1 p.m.

The Stingers will host the Canadian University Men’s Rugby Championship Nov. 20-24. As the host team, Concordia already has a berth in the national tournament. The winner of the RSEQ conference also earns the right to compete. In the event that Concordia wins the Quebec title, the conference finalist will also qualify for the championship.