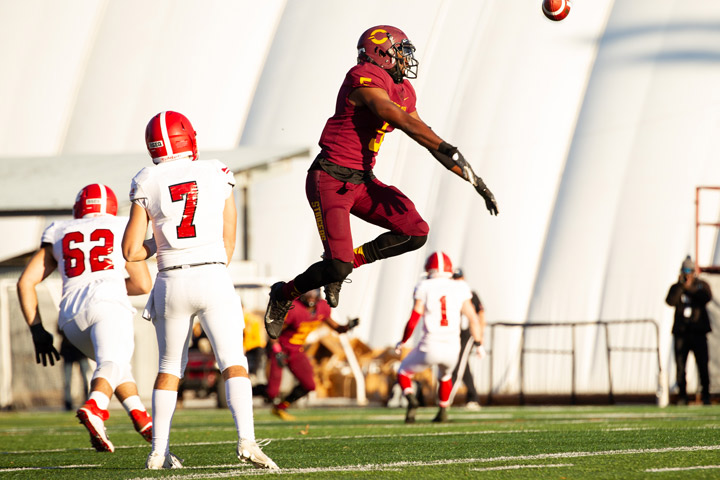 Four members of the Concordia Stingers were honoured when the RSEQ announced its 2019 football all-stars on Thursday morning.

Third-year halfback Khadeem Pierre was the only Stinger on the defensive side of the ball to be acknowledged. The Ottawa native led the RSEQ with three interceptions, all of which were returned for touchdowns. However, two were called back on penalties.

Pierre played all eight games, collecting 22 solo tackles and 13 assists. He also forced a fumble, recovered one and had a pass breakup.

This is Pierre’s second conference honour. In 2017, he was the RSEQ’s outstanding rookie on defence.

Tyrrell, who is from Dorval, Que., wraps up his final university season with 52 receptions for 779 yards and two touchdowns in eight games. He leads the RSEQ in receptions, yards and average yards per game with 97.4.

Murphy, a versatile rookie from Montreal, closed out the regular season with very impressive numbers. He caught 34 passed for 491 yards and four touchdowns in eight games.

He was third in the conference in receiving yards, but he led all receivers in the RSEQ with four touchdowns.

Vance, the fifth-year pivot from Visalia, Calif., finished the regular season on top of the RSEQ with 148 completions on 246 attempts for 2014 yards and seven touchdowns.

The Stingers travel to Quebec City to play the Laval Rouge et Or in RSEQ semifinal action on Saturday at 1 p.m.