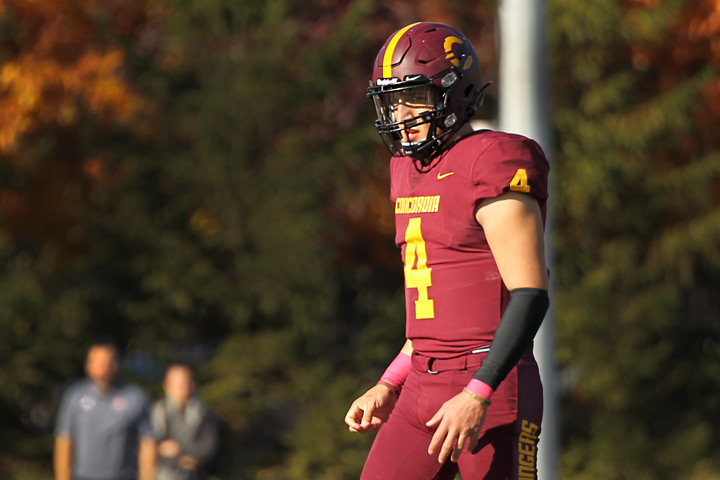 Concordia Stinger quarterback Adam Vance was presented the Jeff Russel Memorial Trophy as the outstanding player in the RSEQ football conference in Quebec City this morning.

Vance goes forward as the Quebec nominee for the U SPORTS Hec Crighton Trophy awarded annually to the top player in Canadian university football.

A resident of Visalia, Calif., Vance started in all eight regular season games and the conference semifinal.

He finished the regular season on top of the RSEQ in several statistical categories. Vance completed 148 of 246 passes (60.2 percent) for 2014 yards and seven touchdowns. He had the most attempts, completions, yards and touchdowns in the league.

With 2014 passing yards, he was the only pivot in the RSEQ to break the 2000-yard mark. He outdistanced the 2019 class of quarterbacks by a significant amount. McGill’s Dimitrios Sinodinos was his closest competitor with 1421 yards.

The six-foot-two, 208-pound all-star helped Concordia establish the No. 1 passing offence and the No. 2 overall offence in the RSEQ. He also helped James Tyrrell, the top receiver in the conference, and outstanding rookie Jeremy Murphy earn all-star honours.

“In a conference where defence is the focal point, Adam had success against some very good football teams,” said Stinger head coach Brad Collinson. “Much of it comes from his ability to read defences. He also has a great pocket presence and showed a lot of leadership this season.”

The 22-year-old pivot handled a lot of change coming into the 2019 season, including working with a new offensive co-ordinator and a new playbook.

“For any fifth-year player, especially a quarterback, learning to play in a new system is tough and demanding,” said Collinson. “Adam worked hard on his craft and fine-tuned his game. I don’t think he gets enough credit for learning a whole new offence and executing it well.”

Vance is only the fifth Concordia football player to be named the outstanding player in the league dating back to 1980 and the Ontario-Quebec Intercollegiate Football Conference. The previous winners were receiver Gerry Prud’homme (1981), quarterback Ron Aboud (1990), quarterback Scott Syvret (2005) and quarterback Trenton Miller (2015).

“Adam is very deserving of this award,” said Collinson. “He’s the best quarterback in our conference and he’s the statistical leader in a lot of categories. He’s endured a lot. He deserves a lot of credit for how he’s prepared, how he’s battled adversity and injuries, and still competed at a high level.”

Vance played two years of junior football at Golden West College in Huntington Beach, Calif. before joining the Stingers. He completes his Canadian university football career with 313 completions on 538 attempts for 4355 yards and 15 touchdowns in three seasons.