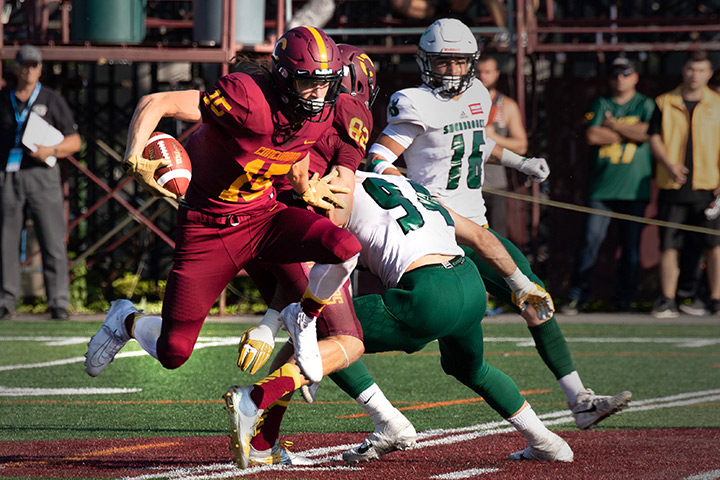 Concordia Stinger inside receiver Jeremy Murphy was named the outstanding rookie in the RSEQ football conference this morning in Quebec City.

Murphy goes forward as the Quebec nominee for the U SPORTS Peter Gorman Trophy awarded annually to the top rookie in Canadian university football.

Right from the start, there were high expectations for this young football player out Champlain College, St. Lambert.

“He was a jack of all trades in Cégep, successfully playing receiver, quarterback, defence, special teams,” said Stinger head coach Brad Collinson. “He was the league’s MVP on offence, and we knew he loved the game and was passionate about playing.”

The 20-year-old resident of St. Bruno de Montarville, Que. quickly became a major part of the Stingers’ offence. He caught 34 passes for 491 yards and four touchdowns.

He led the RSEQ in receiving touchdowns, he was third in yards and fourth in receptions.

“I’m impressed with how he handled things in his first year of university football,” said Collinson. “His competitiveness makes him lethal. He believes he can run every route and catch every ball. He usually plays against the best defensive backs on the other teams. Even when he became more familiar to the teams around the league, they couldn’t stop him.”

Murphy developed a good rapport with Stinger receiver coach Seydou Junior Haidara which helped him develop at the university level.

“He’s really flourished working with Seydou,” Collinson said. “I think Jeremy is going to be a big part of our offence going forward. His ceiling is still very high. He hasn’t reached his potential. I’m excited about his future.”