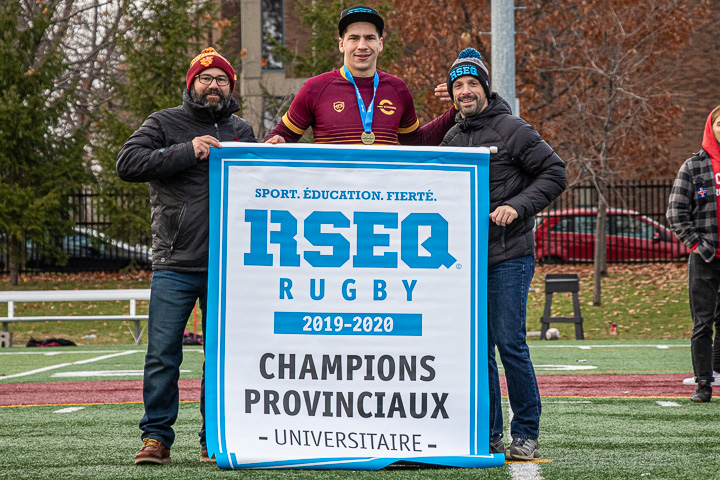 The win also gave the Stingers a third straight season with a perfect record. Concordia had a 6-0 win-loss record in the regular season and then won its two playoff games.

After a scoreless opening 20 minutes, the Stingers picked up momentum and pounded out three unanswered tries before halftime. Veteran Stephen Martinez opened the scoring in the 23rd minute. Dylan MacDonald picked up his first try of the game in the 28th minute and Michael Laplaine Pereira add one at 35 minutes. Rookie Stan Blazkowski connected for the converts on all three.

MacDonald’s second try of the game stretched the lead to 28-0 in the 45th minute. McGill replied with a couple of tries to cut the lead to 28-14 by the 68th minute. However, the Stingers were not done. Blazkowski came up with a drop goal and Laplaine Pereira delivered his second try of the day to make it 38-14. McGill punched in a final try with five minutes left to play.

Laplaine Pereira was named Concordia’s MVP and Andreas Dionasoloulos was the MVP for McGill.

Both teams have qualified for the third annual Canadian University Men’s Rugby Championship hosted by Concordia Nov. 20-24. The Stingers will go into the tournament as the Quebec champion and benefit from a higher position in the seeding. McGill will have the host’s spot and a lower seed.

The rankings of the teams at national championship will be announced early in the week. Joining Concordia and McGill at the finals are the Queen’s Gaels, Guelph Gryphons, Brock Badgers, UBC Thunderbirds, Victoria Vikes and an AUS representative – either the UNB Ironmen or the Dalhousie University Rugby Football Club.