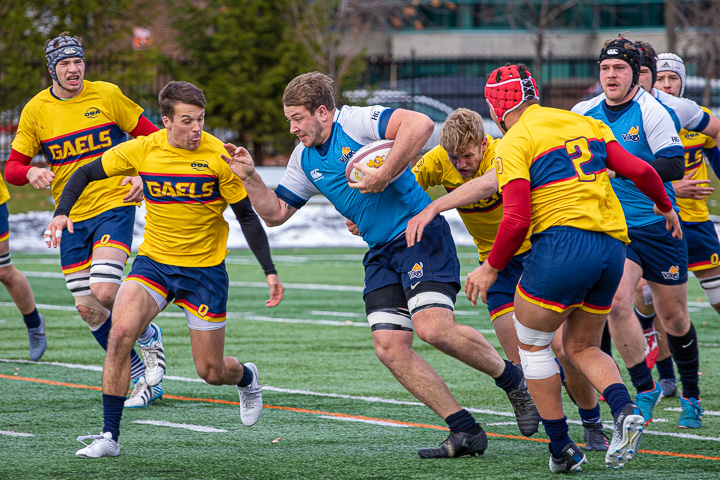 The top ranked UBC Thunderbirds eked out a 22-18 win over the pesky Concordia Stingers on Friday afternoon in Montreal to advance to the gold medal game of the 2019 Canadian University Men's Rugby Championship.

The two-time defending national champions will meet the third-seeded Victoria Vikes in the final on Sunday at 1 p.m. The Vikes defeated the No. 2-ranked Queen’s Gaels 14-8 to earn their spot in the final.

The Thunderbirds started strong in their semifinal match, imposing their typical physical game and going out front 12-0 on tries by Nick Frost and Liam Doll (converted by Jack Scher) in the first 13 minutes. Concordia managed a penalty goal from Adian McMullan in the 22nd minute and the first half ended with the score at 12-3.

Concordia played an inspired 30 minutes when the teams returned to the field, pulling ahead 13-12 after a Thomas Goetz try in the 34th minute and another penalty goal from McMullan in the 40th minute.

Frost scored his second try of the day in the 53rd minute to give his Vikes a 19-13 lead. Harrison Smith connected for the convert and he added a penalty goal in the 59th minute. Concordia had an unconverted try in the final seconds to make the final score 22-18.

The close game was a surprise to a lot of fans, and a source of pride to the Stingers who were seeded fourth.

“We fought our hearts out,” said Concordia rookie winger Alec Montminy. “This is a huge accomplishment. We went to war. We rose to the challenge.”

The Stingers will meet Queen’s in the bronze medal game on Sunday at 10:30 a.m.

The Gaels also fought hard in a tight semifinal contest in extremely windy conditions on Friday afternoon. The first half was scoreless. Victoria picked up tries from Logan Martin-Feek in the 35th minute and Jonas Robinson in the 53rd minute. Both were converted by Jenner Teufel and that’s all the Vikes need for the win.