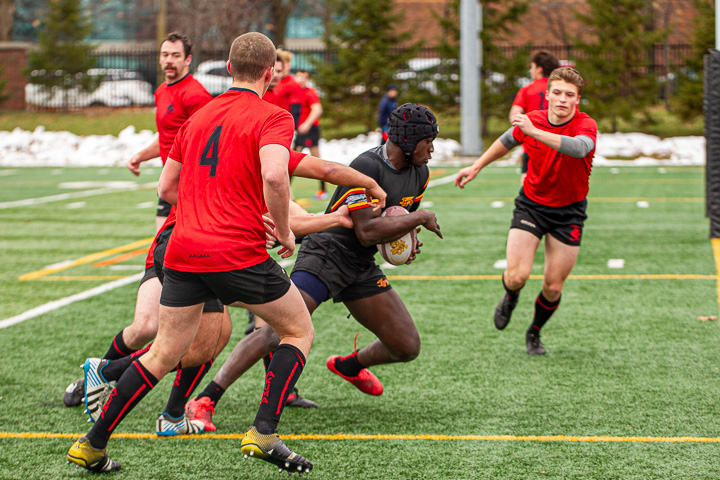 The Badgers came into the national playdowns as the last seed in the eight-team tournament. The Ontario bronze medallists struggled in their opening game on Wednesday, losing 56-10 to the top ranked UBC Thunderbirds. But the following day they started rolling and quickly became the crowd favorites. They took down the fifth-seeded Guelph Gryphons 19-8 in the consolation semifinals, avenging a 47-14 regular season loss.

On Saturday McGill, the No. 7-ranked team, proved to be a worthy opponent, and the teams traded punched through most of the match. But Brock persevered and was able to put the game away in the final minutes.

At halftime, the Badgers had a 5-0 lead on a try by Devon Ollson. McGill’s Pierre Grison (convert Monty Weatherall) scored to open the second half, giving his team a 7-5 lead. The teams traded tries with Carter Bondy (convert Steven Commerford) scoring for the Badgers and McGill taking the lead back on an Antoine Guay score (Weatherall convert). McGill held a 14-12 lead with 10 minutes left to play.

With four minutes remaining Brock was awarded a penalty try and then Victory Eichie scored (convert Commerford) with two minutes left on the clock to make the final 26-14.

In the seventh-place game, Guelph rolled over the sixth-seeded UNB Ironmen 79-5. Logan Crawford scored the lone UNB try, opening the scoring in the match. After that it was all Guelph who got tries from Darien Hewey (3), Colin Smibert (2), Mitch Talbot, Kirk Addai Sarfo, Riley Di Nardo, Quenton McLean Lavado, Jason Simmonds, Mitch King, Aaron Pacha and Cody Weese-Burton who also made seven converts.

The medal games take place Sunday. The Concordia Stingers and the Queen’s Gaels will play for the bronze medal at 10:30 a.m. The two-time defending champion UBC Thunderbirds will face the Victoria Vikes in the gold medal match at 1:30 p.m.