Victoria wins the championship, the Stingers finish in fourth place. 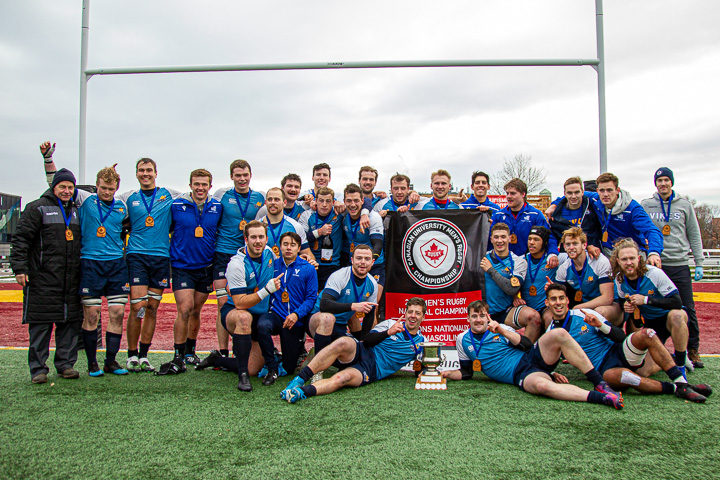 The Victoria Vikes won a 21-20 thriller to dethrone the two-time defending champion UBC Thunderbirds in the gold medal game of the Canadian University Men's Rugby Championship at Concordia Stadium in Montreal on Sunday afternoon.

Earlier in the day the Queen’s Gaels took down the host Concordia Stingers 31-22 to win the bronze medal.The championship game was decided in dramatic fashion. With Victoria out front 21-15 and no time left on the clock, UBC’s Evan Norris ran 12 yards down the right sideline to score in the corner. That made it 21-20.

Max Radcliffe had the unenviable task of taking the corner kick on the last play of the game with the championship on the line. He missed wide left.

Even before it came down to the last seconds, the two teams waged an epic battle that will go down in history as one of the all-time classic university men’s rugby games.

The Thunderbirds came out strong, going up 12-0 early thanks to tries from Dan Archer in the fifth minute and Nick Allen (convert by Jack Scher) in the 15th minute.

The Vikes refused to buckle and came back with two tries of their own to close out the first half. James O’Neill scored both – one at 25 minutes and the second in the 29th minute. Jenner Teufel connect for both converts putting his team up 14-12 heading to the intermission.

UBC regained a 15-14 advantage when Scher delivered a penalty goal in the 49th minute. The lead changed hands again in the 51st minute when Nick Caron scored a try for the Vikes and Teufel made the convert. That set the stage for the wild finish.

Victoria has earned a berth in the championship tournament in each of its three years. The Vikes were silver medallists in the inaugural competition in 2017. Last year they hosted and finished in third place.

Queen’s and Concordia also played an intense game that was decided in the dying minutes.

The Gaels had the edge through much of the early going largely due to the play of scrum half Dylan Young who scored three tries and added three converts. They were up 14-5 at halftime and had a comfortable 31-10 lead with five minutes to play.

Then Concordia made a late charge, getting two tries from Michael Laplaine-Pereira, the last coming in the 59th minute. Stan Blazkowski connected for the first convert, but missed the second. The Stingers were on a roll but ran out of time.

This is Queen’s second appearance at the national championship. In 2018 the Gaels won the silver medal.

Concordia finished fourth for the second year in a row.