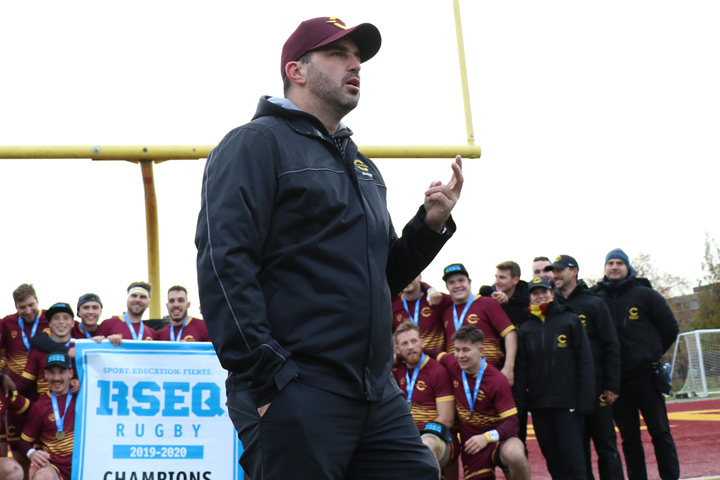 After four successful years at the helm of the Concordia Stingers men's rugby program, Craig Beemer announced he's stepping down as head coach of the team.

He will step away from coaching for personal reasons, but will remain in his positon as the Stingers’ varsity academic co-ordinator.

“I’d like to thank Craig for the countless hours he devoted to elevating the level of our men’s rugby program and making it one of the most respected in the country,” said D’Arcy Ryan, the Director of Concordia’s Recreation and Athletics Department.

“He also cared deeply about the growth and education of the young men on the team, many of which have graduated and embarked on great things.”

Beemer started coaching rugby in 2005 at McGill University. He was an assistant for a couple of years and took over as head coach in 2007. He won seven straight RSEQ championships at the helm of the program.

The Peterborough, Ont. native joined Concordia as an assistant coach in 2014 and was announced as the head coach in August of 2016.

The first season was a rebuilding year that saw him lay down the foundations for the future. Beginning in 2017, the Stingers posted three consecutive undefeated seasons, won three RSEQ championships and competed each year in the national championship tournament, including the 2019 edition hosted by Concordia.

The search for a new head coach will begin immediately. The Department of Recreation and Athletics is now accepting applications for the position. Recruiting, staffing and development of student-athletes are primary responsibilities for this role.

The head coach will prepare the Stingers for both sevens (winter) and 15s competition (fall). A commitment to engaging alumni and community outreach is also expected. A university degree, minimum of three years of rugby coaching experience and NCCP Level II certification is required. NCCP Level III certification is preferred. Proficiency in English and French are also mandatory.

The deadline to apply for the position is Thursday, Dec. 19 at noon. Applications should be emailed to Graeme McGravie, the associate director, student-athlete services, at graeme.mcgravie@concordia.ca.