George Dixon and his Loyola players pose with crosstown rivals. 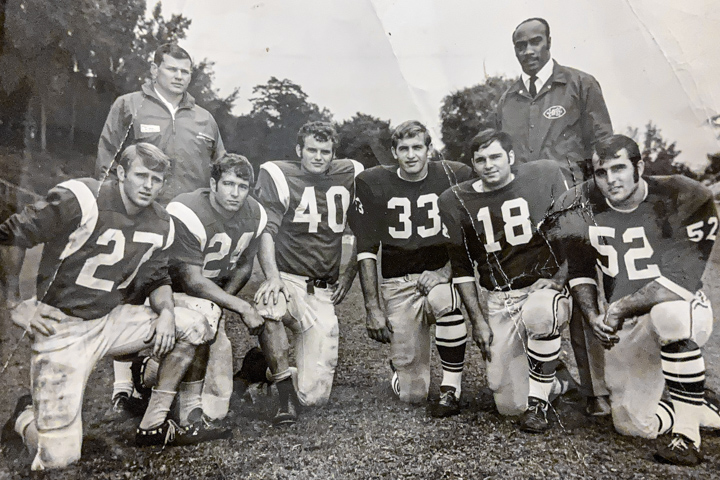 "We have a balanced team – hard hitting and never quitting."

George Dixon was born in Newhaven, Conn. in 1934, and went on to attend University of Bridgeport where he was a star running back. The Green Bay Packers selected him in the ninth round of the 1959 NFL draft. Despite a strong showing at training camp, rookie head coach Vince Lombardi cut him and told him to contact the Montreal Alouettes.

Dixon went on to play seven seasons (1959-65) with the Alouettes. He was a four-time CFL all-star and in 1962 he was the league’s Most Outstanding Player. During his career he rolled up 5,615 yards on 896 carries. He scored 42 rushing touchdowns and 59 in total.

His number 28 was retired by the Alouettes, and he was inducted into the Canadian Football Hall of Fame in 1974.

Dixon remained in Montreal after he retired from the CFL, and in 1968 he was hired as the head coach of the Loyola College football team. He was the first Black head coach in the history of Canadian university football.

The new coach inherited an 0-10 team with the worst record in Canada and the worst record in Loyola football history. But it didn’t take Dixon long to turn the program around. In his first season, Loyola posted a perfect 6-0 win-loss record to win the Eastern Division of the Central Canada Intercollegiate Football Conference. That year Loyola was the only undefeated team in the country. In six games the team scored 201 points while allowing just 18.

Dixon and his dominant 1968 team were described as “the Maroon and White machine which mercilessly swept aside all opposition” in the student paper.

The respected coach stayed at Loyola for three campaigns and had a regular season record of 13-5. He left to pursue a business opportunity.