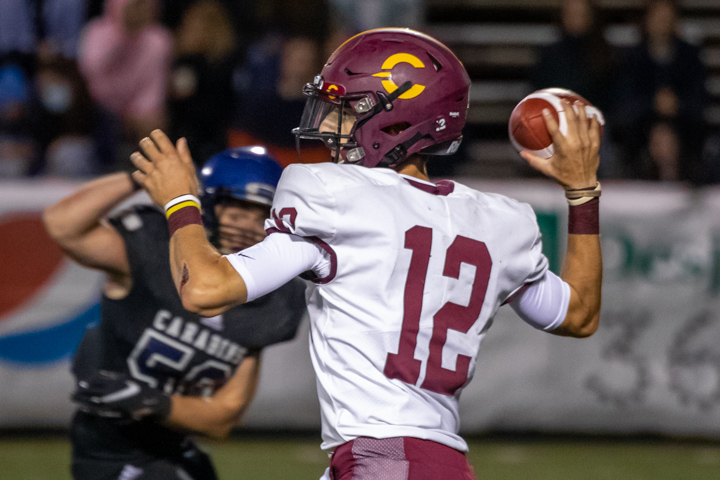 It wasn’t that long ago that Concordia Stinger quarterback Olivier Roy was wondering if he had a future in football.

“After Cégep he thought football was over for him,” said Stingers head coach Brad Collinson of his third-year pivot from Cégep La Pocatière in the RSEQ’s Division 3 league. “But we were recruiting him.”

Roy backed up RSEQ MVP Adam Vance with the Stingers in 2019. Then COVID-19 wiped out the 2020 season. But he worked hard through the pandemic and at Concordia’s training camp last month. He was named QB1 for the season-opener on Sept. 4.

Last night, Roy led the Stingers to a 31-28 come-from-behind victory over the RSEQ defending champions, the Montreal Carabins. He completed 27 of 35 passes for 323 yards and four touchdowns. He also ran the ball four times for 42 yards.

With 2:13 left in the fourth quarter and Montreal leading 28-24, he completed a five-yard pass to Vince Alessandrini for a TD and the victory.

“He’s a very calm person,” said Collinson. “After the touchdown, he went straight back to the bench and grabbed the iPad to review the play with (offensive co-ordinator) Alex Surprenant.”

The last time the Stingers defeated the Carabins was Oct. 22, 2010. It’s been 11 years since Concordia was victorious. And it didn’t look good at the beginning of last night’s game. Montreal was up 17-0 after the first quarter.

“I think the players showed a lot of resilience,” said Collinson. “They’re ballers. No quit.”

Collinson took over as head coach of the Stingers in 2018. He was interim coach that first season, but shortly after he was handed the reins to the program. He worked diligently to build a coaching staff and to recruit players that had character and fit in his vision.

“With our recruiting process, we want to build a culture,” he explained. “We want players who want to be here. They face tough decisions when they consider us. It’s easier to go to a program where they can step in and win right away. When they choose to come here, it’s because they want to build something. They want to succeed. We’re starting to see it pay off.”

The Stingers started to chip away at the big deficit in the second quarter. Roy connected with rookie receiver Jaylan Greaves for a 37-yard touchdown. It was the first university major for both Roy and Greaves.

Late in the quarter, kicker Andrew Stevens connected on a 19-yard field goal and the score was 17-10 at the half.

U Sports 2019 rookie of the year Jeremy Murphy had a major impact in his first game of the season. He caught nine passes for 95 yards and two touchdowns, one in each of the last two quarters.

On defence, safety Khadeem Pierre led the Stingers with six total tackles and a breakup. Halfback Derek Achaempong was a workhorse with three tackles and a key interception late in the game.

Next up, the Stingers will play the McGill Redbirds on the road. Kickoff is schedule for 7 p.m. on Friday at Percival Molson Stadium.