Stinger QB Olivier Roy threw for 580 yards and five touchdowns in the game. 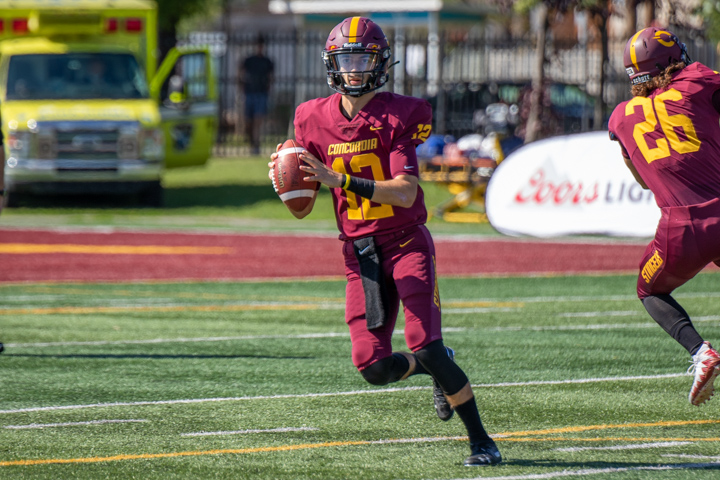 Olivier Roy has record-setting performance in win over Sherbrooke

Quarterback Olivier Roy threw five touchdown passes and a RSEQ record 580 yards to lead the Concordia Stingers to a 42-39 overtime victory over the Sherbrooke Vert & Or before a boisterous sold out crowd at Concordia Stadium on Saturday afternoon.

The third-year pivot from Donnacona, Que. completed 29 of 38 passes for 580 yards. The previous conference record was held by McGill University’s Matt Connell who threw for 557 yards on Oct. 20, 2007.

At the U Sports level, Roy now owns the second best performance on record. Greg Vavra from the Calgary Dinos is in first place. He threw for 627 yards versus the Saskatchewan Huskies on Oct. 7, 1983.

Of course, Roy now owns the Concordia record as well. He eclipses Terrance Morsink who threw for 516 yards on Oct. 16, 2010. That also came at the expense of the Vert & Or.

“Olivier is playing out of this world,” said Stingers head coach Brad Collinson. “He carries the team on his shoulders, he takes all the pressure and plays at a level I’ve rarely seen.”

Vert & Or quarterback Anthony Robichaud completed 34 of 43 passes for 382 yards, three touchdowns and one interception.

On defence Stinger linebacker Zach Philion stood out with seven solo tackles, and three assists for 8.5 total tackles. He also had a key interception that shut down Sherbrooke right before halftime.

The teams traded punches early, but Concordia went into the break with a 26-14 lead. Sherbrooke chipped away at the lead and eventually tied the game at 36-36 with 37 seconds left in regulation.

In overtime, the Vert & Or had the first possession and managed to get three points off a 28-yard field goal. The Stingers answered with the nine-yard TD strike to Greaves and earned their second overtime victory in a row.

Concordia's win-loss record improves to 3-1, good for first place in the RSEQ. Next, they travel to Quebec City to meet the Laval Rouge et Or on Oct. 10 at 1 p.m.