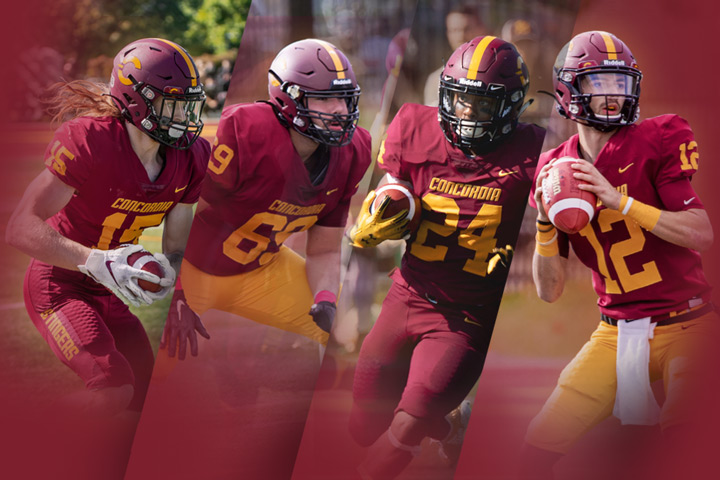 Four student-athletes from the Concordia Stingers football program have been invited to participate in the U Sports East West Bowl events at McMaster University in Hamilton May 3-7.

The East-West program is designed to showcase U Sports players who are eligible for the 2023 CFL draft. It features a game on May 7 at noon that is the highlight of a week of activities.

Murphy, who checks in at six-foot-two and 195 pounds, was the U Sports Rookie of the Year in 2019. He suited up for just three games in 2021 but had a huge impact with 23 receptions for 307 yards and four touchdowns. His career totals are 57 receptions for 798 yards and eight touchdowns in 11 games.

Hall has played three years with the Stingers and been an integral part of Concordia’s highly successful passing offences. The offensive tackle is six-foot-four and 285 pounds.

Foster Verdier was an all-star running back coming out Vanier College in the RSEQ Cégep league. He dressed for all eight games as a rookie in 2019 and has demonstrated his versatility as his career advanced. He also returned punts and had a few receptions in five games last season. The explosive back is five-foot-seven and tips the scales at 180 pounds

Roy, the 2021 RSEQ MVP and a second team all-Canadian, had a schedule conflict and decided to attend the Stingers’ spring camp which is also taking place the first week of May

The Stingers will be on the East roster that features top talent from the RSEQ and AUS schools, as well as Carleton, Ottawa and Queen’s from Ontario.