Cory Watson (left) and Seydou Junior Haidara have a wealth of knowledge to share. 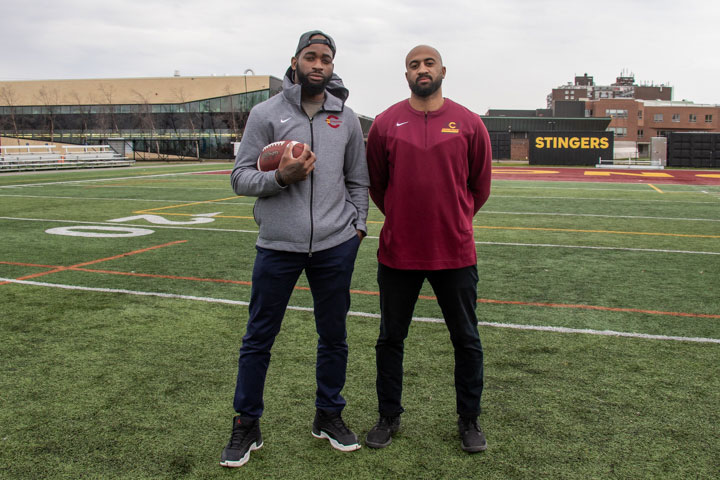 “Cory has to be one of the top athletes to ever play here,” said Collinson. “When you can find someone with Cory’s expertise and experience, it is a welcome addition to the coaching staff. Also, having an alumnus involved with your team and back in the maroon and gold, that’s special.”

Watson will join forces with receiver coach Seydou Junior Haidara and together they will oversee the preparation and development of the receivers.

“The receivers typically are a large group and having two accomplished and respected coaches working with them is going to benefit our program,” said Collinson.

An inside receiver originally from Dollard des Ormeaux, Que., he spent 10 years in the CFL with the Winnipeg Blue Bombers, who selected him in the second round of the 2010 draft, the B.C. Lions, the Saskatchewan Roughriders and Edmonton, where he won a Grey Cup in 2015. He had 374 career receptions for 4138 yards and 17 touchdowns in 148 games.

Watson spent four seasons with the Stingers and was the leading receiver on the team in his final three seasons. He finished his university career with 109 receptions for 1744 yards and 13 TDs. He was an all-star and a second team all-Canadian in 2009.

Watson stepped away from the CFL after the 2019 season. He helped coach the McGill Redbird receivers in 2021.