Émilie Lavoie (left) and Jaylan Greaves were unstoppable in their rookie campaigns. 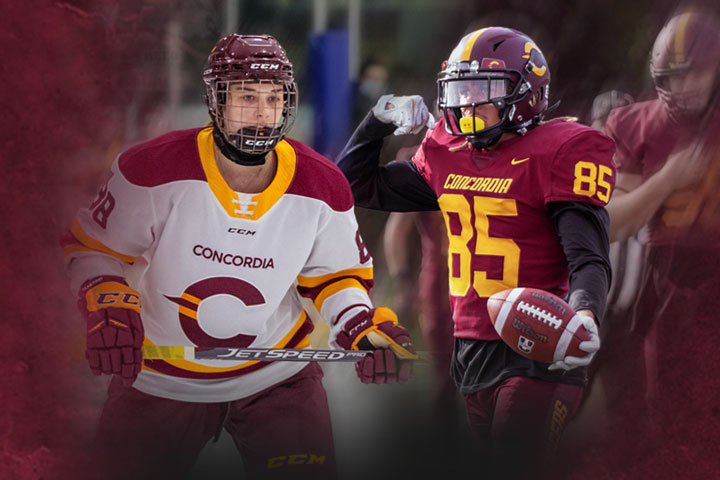 Concordia Rookie of the Year honours go to Lavoie and Greaves

The Concordia Department of Recreation and Athletics is pleased to announce forward Émilie Lavoie of the women's hockey team and receiver Jaylan Greaves of the football team have been named the 2021-22 Stingers' Rookies of the Year.

Lavoie is the recipient of the Laurie Brodrick Award as Concordia’s Female Rookie of the Year. She was named to the U Sports women’s hockey all-rookie team and she was the RSEQ conference’s rookie of the year.

Lavoie of Beloeil, Que. had a significant impact in her rookie campaign. She played all 15 regular season games, collecting eight goals and eight assists for 16 points. She was the sixth best scorer in the Quebec conference and the highest scoring rookie.

Her success at the university level is no surprise as she was a highly sought-after recruit out Cégep Édouard-Montpetit where she was a RSEQ all-star in 2019-20.

“Émilie has an impressive skill set that is amongst the best on our team,” said Stingers head coach Julie Chu. “Her raw athletic skills along with her hockey intelligence makes her a dynamic player on the ice. “We are proud of the growth of Émilie has made this year and we know she will continue to have a big impact on our team.”

Greaves is the 2022 recipient of the Concordia Male Rookie of the Year Award. He earned multiple honours for his tremendous freshman season, including being awarded the Peter Gorman Trophy as the outstanding rookie in Canadian university football. He was also a U Sports first team all-Canadian and the RSEQ Rookie of the Year.

The electrifying receiver, a Montrealer who checks in at six-feet-two and 170 pounds, closed out the 2021 regular season with very impressive receiving numbers. He caught 27 passes for 605 yards and five touchdowns in eight games. He was third in the Quebec conference for total receiving yards, second in touchdowns, first in average yards per catch at 22.4 and he had the longest play of the season with a 77-yard catch for a TD on Oct. 23 in a 31-3 victory over the McGill Redbirds.

“Jaylan is competitive. That’s the biggest thing when describing him,” said Concordia head coach Brad Collinson. “His accomplishments in his first year of university football are remarkable. Every game he made a big play and he had a lot of clutch plays when we needed them.”

Greaves comes out of the Châteauguay Raiders football program. He started playing when he was four years old and wrapped up his career with the organization in 2019 with the junior program.