Star receiver Jeremy Murphy is back and in great shape after a tough 2021 season. 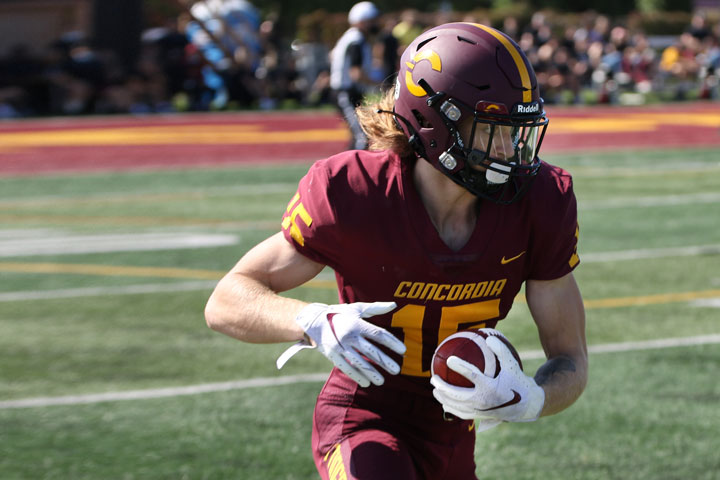 Preview: Will the football team pick up where it left off last season?

Brad Collinson has been building his Concordia Stingers football program up since he took over as interim head coach in the summer of 2018. The following year he officially became the head coach and he started implementing his vision and assembling staff and players that could thrive and shine in his system.

Throughout that four-year journey you could frequently hear the phrase, “trust the process.” In 2021, the team took a big leap forward with a 4-4 win-loss record and a third-place finish. Now the burning question is: can the Stingers progress even more?

“This year, the biggest thing for us is to try and build on what we did last year,” said Collinson. “It is a process. Now we see the solid foundation from what we started. A lot of our current players have been working with us since the beginning of the process, and it’s fun to see where they are now.”

The Stingers will have 11 of 12 starters back on offence. The group led the RSEQ in touchdowns scored with 24 in eight games and had the top offence with an average of 418.8 yards a game

Quarterback Olivier Roy was the 2021 conference MVP after finishing the regular season on top of the RSEQ in several statistical categories. He completed 163 of 265 passes (61.5 per cent) for 2470 yards and 18 touchdowns. He had the most attempts, completions, yards and touchdowns in the league. With 2470 passing yards, he was the only pivot in the RSEQ to break the 2000-yard mark.

This season Roy will have lots of help from a talent-laden receiving crew, starting with 2019 U Sports Rookie of the Year Jeremy Murphy who is back in the lineup and healthy again. Roy can also count on 2021 U Sports Rookie of the Year Jaylan Greaves. He closed out the regular season with very impressive numbers, hauling in 27 passes for 605 yards and five touchdowns in eight games. Finally, team captain Jacob Salvail was exceptional in 2021 with 40 receptions for 632 yards and seven touchdowns in eight games.

“Olivier has a lot of weapons,” Collinson said. “There are playmakers all around him. He just has to do what he does best which is distribute the ball and make good decisions.

“It’s going to be hard for opposing teams to decide what they want to do on defence. Pick your poison. All the receivers are very good and you have to account for all of them.”

One rookie to watch carefully on offence is François Smith, a blue-chip recruit from Cégep St. Jean who checks in at six foot seven, 340 pounds.

Newcomers who show a lot of potential are Isaac Fulham, a versatile, high-energy linebacker out of Campus Notre Dame de Foy. Defensive tackle Tristan Gauthier-Norris lost his rookie season in 2021 to injury. He will make his debut this season. He’s earned Collinson’s praise for his performance in training camp. Another lineman Jacob Belair from Cégep de Outaouais has also impressed the head coach.

The 2022 campaign begins Saturday, Aug. 27 at 2 p.m. when the Stingers host the Montréal Carabins at Concordia Stadium. The teams split a pair of games last season. The Stingers won 31-28 on Sept. 10, while the Carabins rebounded with a 31-19 victory on Oct. 16.