Star receiver Jaylan Greaves is sure to bring the Homecoming crowd to its feet. 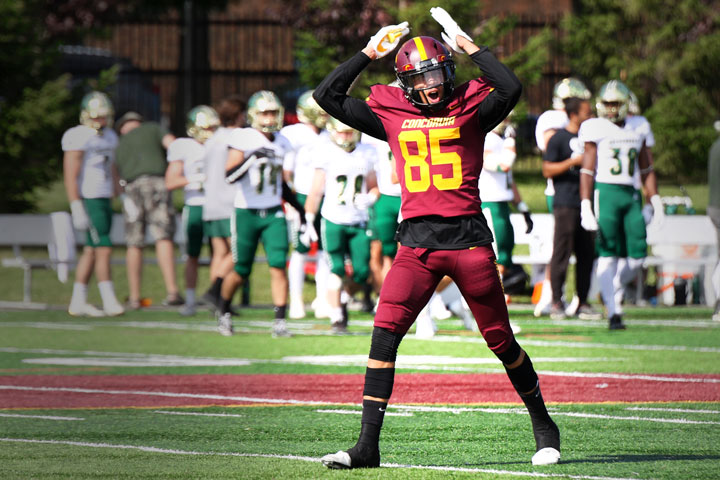 Crosstown rivals to clash at football Homecoming game on Saturday

The 2022 Concordia Homecoming football game is set for this Saturday and will feature an intense battle with the McGill Redbirds and a good amount of nostalgia with large numbers of alumni and several championship teams on hand.

The Stingers are pleased to welcome back members of the Loyola College championship teams of 1962, 1968 and 1972, and the 1982 Concordia University O-QIFC champions as well as members of the Sir George Williams University tradition.

For the first time in school history the Stingers will wear throwback uniforms. They will enter the stadium wearing Loyola jerseys in honour of the great teams of the past and the student-athletes who competed and carried forward the football legacy.

Head coach Brad Collinson and his team with use the energy from the Homecoming crowd to motivate them in their clash versus their crosstown rivals. Early in the 2022 season both Concordia and McGill are still looking for their first wins, and this game will go a long way towards securing a playoff spot for the victor.

Players to watch on Saturday include Concordia quarterback Olivier Roy who was the RSEQ MVP in 2021 and his favorite target this season slotback Jaylan Greaves. The 2021 U Sports Rookie of the Year leads the Stingers with six receptions for 117 yards and two touchdowns in two games.

Tickets are only available online HERE