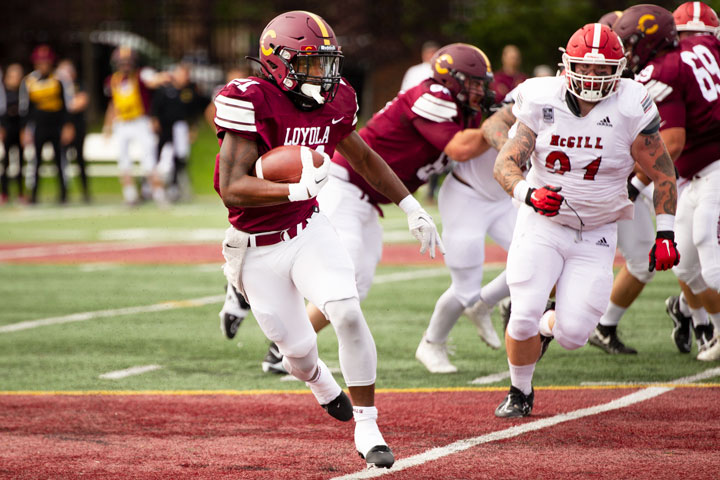 Stingers run away with victory in clash with McGill Redbirds

The Concordia Stingers scored six rushing touchdowns in a lopsided 42-16 defeat of the McGill Redbirds before an exuberant Homecoming football crowd at Concordia Stadium on Saturday afternoon.

Second-year running back Dwanté Morgan did most of the damage on the ground. He carried the ball nine times for 111 yards and a touchdown. Quarterback Olivier Roy ran the ball four times for 37 yards and two majors. Short-yardage pivot Adrien Guay ran in two scores. He had seven carries and 17 yards on the day. Finally, Franck Tchembe, also in his second year, scored the first touchdown of his university career late in the game. He rushed the ball three times for 15 yards.

Six rushing touchdowns in one game is remarkable. The Stingers scored a total of six rushing majors in eight games last season. After three games this year, the offence has seven in the books. The most Concordia has scored in one season in recent memory is 13 in 2008. Besides that, the top number was nine rushing TDs and that took place in 2015 and again in 2017.

Overall, Concordia rolled up 200 yards rushing on 27 carries for an average of 7.4 yards per rush. The Stingers had 38 first downs and a total offence of 586 yards.

The Stingers defence held McGill to 20 first downs and 360 yards of offence. Linebacker Joel Therrien led Concordia with six tackles, including a sack. Halfback Derek Acheampong and all-Canadian cornerback Ahmed Boubacar both hauled in big interceptions in their own end zone, shutting down a couple of big McGill drives.

The Stingers up their win-loss record to 1-2, while the Redbirds fall to 0-3. The teams meet again in the Shaughnessy Cup game on Friday, Oct. 21 at 7 p.m. at McGill’s Percival Molson Stadium.