From left, Jeremy Murphy, Dawson Pierre and Santino Sparagna were the 2022 standouts. 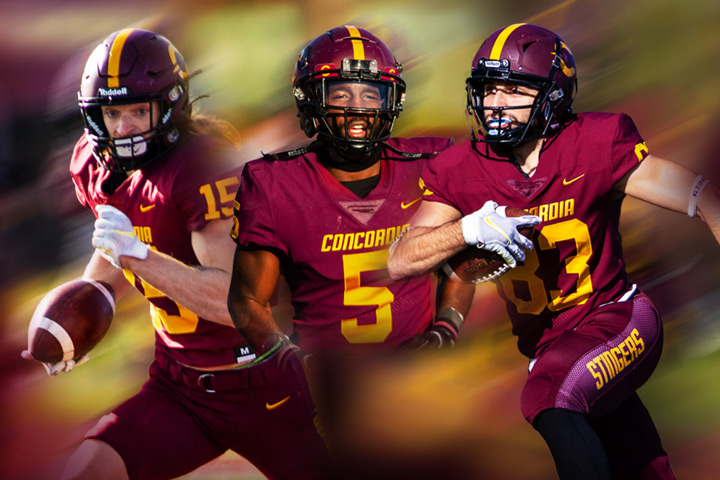 Three members of the 2022 Concordia Stingers football team were on the honour role when the RSEQ announced its all-star team today.

Leading the way is second-year safety Dawson Pierre from Longueuil, Que. He played all eight regular season games and led the RSEQ in tackles with 38 solos and 11 assists for 43.5 in total. He also had two interceptions. He was the RSEQ defensive player of the week on Oct. 24, but this is his first all-star honour.

Wide receiver Jeremy Murphy collects his second all-star award in three years. In 2019, he was on the conference all-star team and was named the RSEQ and U Sports Rookie of the Year. In 2022, he had 29 receptions for 589 yards and two touchdowns in seven games. He averages 20.3 yards a catch which is tops in the conference. The six-foot-two, 195-pound St. Bruno, Que. resident is considered a top prospect for the 2023 CFL draft.

Second-year player Santino Sparagna has earned a spot on the all-star team as a kick returner. In eight games he returned 39 punts for 378 yards (9.7 average) and 16 kickoffs for 380 yards (23.8 average). The Montrealer is also a receiver and caught 23 passes for 325 yards. He has 1083 all-purpose yards for an average of 135.4 a game which is the most in the conference. He has been RSEQ and U Sports Special Teams Player of the Week on two occasions this season. This is his first all-star honour.

All three Stinger all-stars are enrolled in the Recreation and Leisure Studies program at Concordia.